Former Vice President Joe Biden, left, and Sen. Bernie Sanders, I-Vt., greet one another before they participate in a Democratic presidential primary debate. 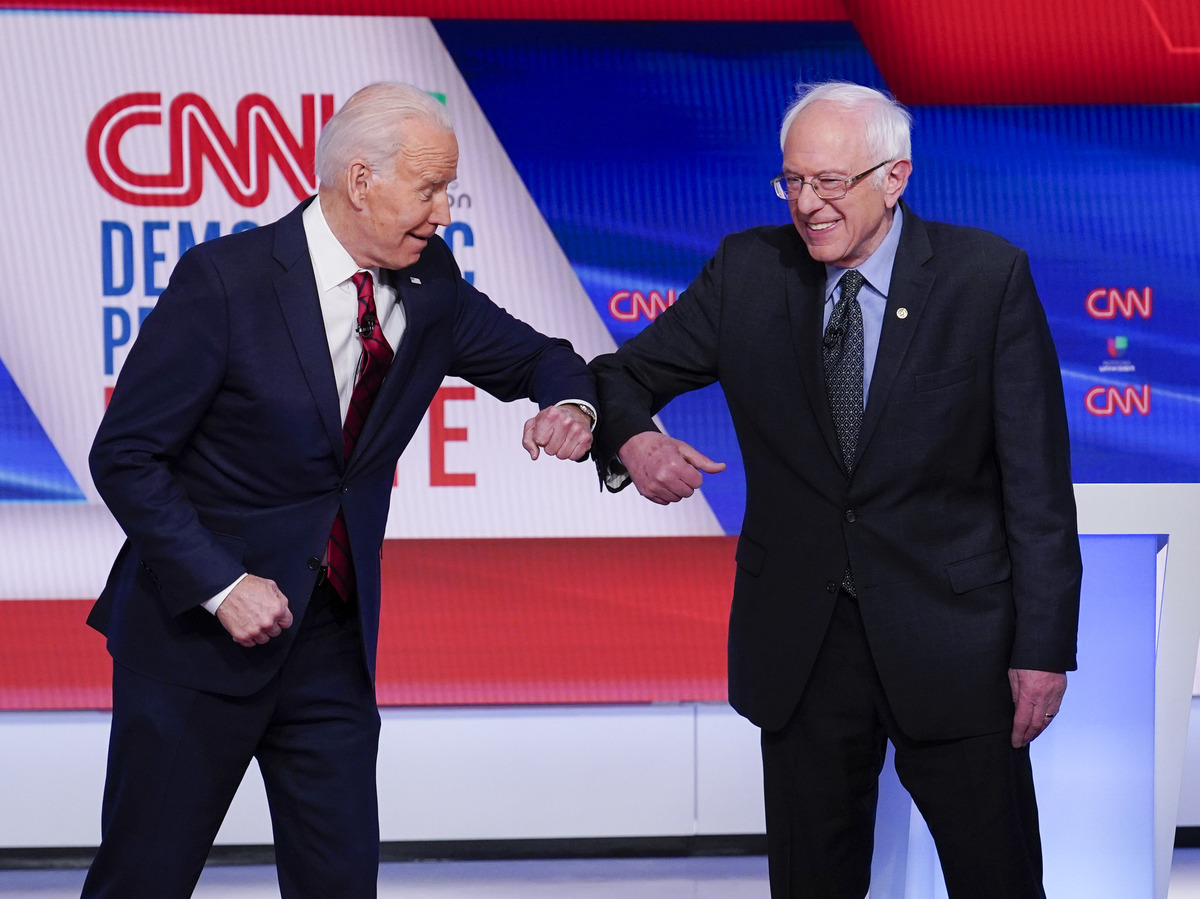 Former Vice President Joe Biden, left, and Sen. Bernie Sanders, I-Vt., greet one another before they participate in a Democratic presidential primary debate.

Just before the Democratic debate Sunday, the Centers for Disease Control and Prevention put out guidelines encouraging Americans not to gather in groups of 50 or more for the next eight weeks.

Eight weeks. Americans are hunkering down, professional and college sports have suspended seasons, many states have closed schools. But voting – at least for now – continues. And so did the first one-on-one Democratic primary debate of this cycle – albeit in a very different way than originally planned.

The debate between former Vice President Joe Biden and Vermont Sen. Bernie Sanders took place inside a Washington, D.C., CNN studio rather than before an audience in Arizona, one of the states voting Tuesday in the primaries along with Florida, Ohio and Illinois.

What to make of the kind of debate that’s never been seen before? Here are the takeaways from Sunday night:

As to be expected, the novel coronavirus dominated the early part of the debate. The candidates tried to distinguish themselves from President Trump – and it started before the debate even began with an elbow bump between the two men in lieu of a handshake.

During their answers, Biden displayed a command of the levers of government: saying, for example, that he would deploy the military to address the coronavirus crisis, and explaining how. Sanders, on the other hand, pivoted to talk about the broader ills of the U.S. health care system and tried to promote his Medicare For All plan.

Biden pointed out that a single-payer system didn’t contain the virus in Italy, which is now on lock down.

In the last two weeks, exit polls have shown voters saying they trust Biden more than Sanders to handle a major crisis. And Biden’s inter-agency expertise played to that strength.

2. Biden commits to a woman as VP… and other things

Everyone expected the coronavirus conversation to be the news, and it was. But Biden created a viral moment on a different subject – he declared he would put a woman on the ticket as vice president, if he’s the nominee.

“There are a number of women who are qualified to be president tomorrow,” Biden said. “I would pick a woman to be my vice president.”

Moderator Dana Bash of CNN followed up to confirm, and Biden said yes, he was committing to putting a woman on the ticket. Sanders hegded a bit, saying that “in all likelihood” he would, too, but wanted a “progressive woman.”

It was a smart strategic move by Biden’s team, not just to gain attention, but also to help pacify those on the left who have either been slow to warm — or been outright hostile — to the former vice president’s nomination.

Reaction from the left on Twitter to his move was probably the best Biden has received the entire campaign. It’s all part of his effort to court not just Sanders’ supporters, but Massachusetts Senator Elizabeth Warren’s, too. Also this week, Biden took up Warren’s bankruptcy bill plan and endorsed free tuition at state colleges.

Pointedly, Biden also committed during this debate to putting a black woman on the Supreme Court; to no new fracking; and to only deporting people in the U.S. illegally who are felons. That’s an olive branch to progressive Latinos, many of whom prefer Sanders and are still smarting at President Obama’s high deportation rates.

3. Their policy differences were obvious, but Biden appeared at times to look past Sanders

Overall, Biden was steady. He had moments of using impolitic words (like calling people who are in the U.S. illegally “aliens” before correcting himself), but Biden mostly appeared in command. It helps when you have a more than 150-delegate lead.

Because Democrats allocate their delegates proportionally according to the primary vote, that’s a very difficult lead for Sanders to overcome, especially as the race heads into states that favor Biden.

The debate grew acrimonious at times, and Sanders accused Biden of being funded, in part, by the health care industry. But Biden didn’t really want to get into it.

“I’m not going to get into the back-and-forth about our politics,” Biden said, looking away from Sanders to the moderators.

Even Sanders looked like he didn’t want to mortally wound Biden.

“I know your heart is in the right place,” Sanders said of Biden at one point.

Sanders does appear to have a warmth for Biden that he never had for 2016 opponent Hillary Clinton. The campaigns have talked privately about how the two men have a long-held fondness for each other, which again proves that politics is so much about the personal.

There’s nothing that gets an American audience to the edge of their seats quite like talk of Erskine-Bowles, Dick Lugar and codas.

The danger with a debate between two old Senate hands is they sometimes slip into Senate-ese. In fact, they sometimes seem most in their element talking about who wrote what part of what bill and who really killed what amendment and why.

But scoring points on things people did or didn’t do, said or didn’t say decades ago felt small, especially given the candidates’ dominant positions in the race — and the acute crisis at hand for the country.

Overall, Biden had a solid debate. Because of his delegate lead, even a draw would have given him a win.