The Detroit Lions added another player to their SEC-heavy backfield Friday in the 2020 NFL draft, selecting D’Andre Swift out of Georgia with the No. 35 overall pick.

Swift joins Kerryon Johnson from Auburn and Bo Scarbrough from Alabama as the likely top options in the Lions’ run game.

“It’s amazing,” Swift said. “It speaks volumes to the conference. I think some of the best players come from the SEC. It’s one of the higher conferences in college football. Just to have an all-SEC backfield, it’s just a blessing.” 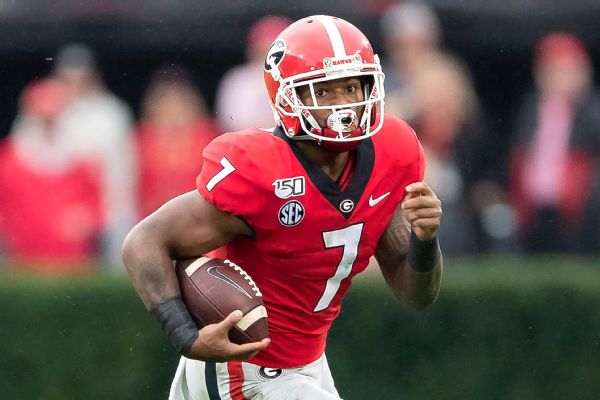 Lions general manager Bob Quinn said he liked a lot of the running backs available early in the second round but was surprised after the first round Thursday night Swift was still available. Swift was on his mind the most overnight from Thursday to Friday, Quinn said, so he hoped Swift could last a couple of picks into the second round so he could select him.

When he did, it gave the Lions another SEC back, although Quinn said it wasn’t necessarily by design.

“Obviously the SEC, I would argue, is one of the top one or two conferences in college football. A lot of people say it is the best conference,” Quinn said. “The competition that is in that conference, from LSU to Alabama to Auburn to Georgia, to all those schools, some of the other teams have really, really good players.

“The level of competition, they get the high recruits. They really, really do. And in D’Andre’s case, he sat behind a first-round pick in Sony and a second-round pick in Chubb from a couple years ago. You go back and watch him early, he was kind of the complement back and he went in there and made plays a couple years ago and then really last year kind of played more and every step along the way, he’s improved.”

Swift’s arrival in Detroit could alter how the Lions end up using their backs. Head coach Matt Patricia has used more of a committee approach to his backfield since taking over as Detroit’s head coach in 2018.

Johnson has struggled with injuries the past two seasons, playing in just 18 of 32 possible games. Scarbrough joined the Lions during the middle of last season on the practice squad and ended up starting five games, gaining 377 yards and a touchdown.

Swift could end up taking carries from both of them as they build a potential all-SEC attack. Swift was first-team All-SEC last season, and Johnson, the Lions’ second-round pick in 2018, was the SEC Offensive Player of the Year in 2017.

Asked how much Johnson’s health the first two seasons played into the decision to select Swift, Quinn said he prefers to have a stable of backs instead of one featured back. Quinn said it’s a position where guys get hit and “take a pounding,” so they have to make sure depth is strong there.

But he also sees Johnson and Swift as complements to each other instead of an overlapping of skill sets, particularly praising Swift’s pass-catching and route-running.

There are a couple of non-SEC running backs on Detroit’s roster, but the only one expected to see any significant time would be Ty Johnson, a running back who played at Maryland. Fullback Nick Bawden, who played at San Diego State, is also in the backfield at times.

When you add in quarterbacks, it only increases the depth of the SEC in Detroit. Starter Matthew Stafford, the No. 1 overall pick in 2009, played at Georgia, and his backup, Chase Daniel, went to Missouri — an SEC school that was in the Big 12 when Daniel was there.

“Just how they prepare, how they prepare their backs and every position, get them ready for the next level no matter what is thrown at them,” Swift said. “Preparing mentally and physically. So it’s preparation.”