JOSH OKOGIE ALMOST missed the text. It was 10 days after the NBA season was suspended, and the Minnesota Timberwolves wing was sleeping in. But he woke up to a message that the team had organized a conference call with world-renowned motivational speaker Eric Thomas — also known as “ET The Hip-Hop Preacher.”

“I wasn’t even going to join it, but when I saw it was ET, I had to hear him. I joined the call, and he was talking about how the ball is still bouncing,” Okogie said. “He was talking about how the season is suspended and the physical ball isn’t still bouncing, but just because the ball stops bouncing on the court, it doesn’t mean the ball stops bouncing in life.

Okogie had been pushing Timberwolves assistant general manager Joe Branch all season to get Thomas to speak to the team. He’d met Thomas last summer while working out at the Chris Paul Basketball Academy. Thomas, who has a close relationship with Paul, made an immediate impact on Okogie. His speaking schedule hadn’t lined up with the Timberwolves’ plans during the season, but the team was able to bring him in during the most uncertain time the NBA has ever faced.

Thomas spoke to Timberwolves players, coaches and staff for 28 minutes, sharing an uplifting message as he urged players to take a positive outlook.

Mental health has become a priority issue for the NBA in recent years, particularly after DeMar DeRozan and Kevin Love came forward to discuss their mental health experiences. And while the league offers multiple official support systems for its players — systems that NBA officials acknowledge might be needed more than ever with the league on hiatus — Thomas has become the unofficial go-to source of support for players around the league. He’s someone they know they can lean on when they’re going through difficult times, whether through a personal connection or just through the inspirational messages he posts on social media.

“ET is just a ball of light,” Cleveland Cavaliers center Andre Drummond told ESPN earlier this season. “His energy, his inspiration, the way he views life and the way he can inspire so many people just by his words is huge. Sometimes I listen to his stuff whenever I’m feeling off or I need a certain message. He has messages for all different types of things.”

Thomas has shared his messages directly with NBA veterans such as Drummond, Paul and Kyrie Irving. He has connected with rookies, including Zion Williamson, as part of the NBA’s annual rookie symposium. Players point to his rise from his humble beginnings and his raw, powerful delivery of his messages as sources of inspiration.

Now, with the NBA on hold and no return date in sight, Thomas finds those messages resonating like never before.

CHRIS PAUL WAS heading into his first postseason with the Houston Rockets. He’d teamed with MVP James Harden to lead the Rockets to the most successful regular season in team history and the top seed in the Western Conference.

And, while he hadn’t heard from Thomas for months, he wasn’t surprised to see his trusted adviser’s name pop up on his phone. They initially connected when Thomas spoke to Paul while he was with the Clippers, then stayed in touch as the veteran point guard changed cities, with Paul even inviting him to speak at his North Carolina summer basketball camps.

Paul got the Rockets within a win of the NBA Finals before a hamstring injury knocked him out of the series against the Golden State Warriors, who went on to win the title. A year later, Thomas and Paul connected again, with the Houston Rockets point guard presenting the speaker with a customized pair of his Jordan CP3.XII signature sneakers featuring motivational quotes from Thomas such as, “Avoid being your own enemy” and “Most of you don’t want success as much as you want to sleep.”

Said Paul: “ET is always somebody I know that’s going to kick it to me straight. He just makes you be more than you think you can. When I think of ET, I just think of pushing myself. Whenever you think that you have gone as far as you can, you can go a little further.”

The NBA announced that due to the ongoing coronavirus pandemic, the 2019-20 season would be suspended effective March 12.

Thomas rose to the top of his profession despite being a homeless high school dropout. He was born in Chicago to a teenage mother but was raised primarily in Detroit. His biological father wasn’t in his life until Thomas was 30.

Thomas spent 12 years working toward getting his bachelor’s degree from Oakwood University in Huntsville, Alabama, in 2001, and went on to earn his master’s and doctorate from Michigan State University.

He got his big break in 2008 after a speech at Michigan State, where he was working as an academic adviser. He challenged the students in the audience to “wanna succeed as bad as they wanna breathe.” The speech was posted to YouTube, where it racked up more than 2 million views.

“I look at his Instagram every day,” Hornets forward Miles Bridges said. “I watch his videos all the time before games because he’s really inspiring and he motivates me, so I try to look at him all the time. I can come to the game unfocused and watch one of his videos and just lock in right away. That’s how powerful he is with his speaking, so I don’t think people give him enough credit for that.”

Thomas posts inspirational messages every day on Instagram, where he has 1.5 million followers — dozens of whom play in the NBA. He has more than 435,000 followers on Twitter. Among the notable sports figures who follow his social media accounts are NBA All-Stars Irving, Drummond, Isaiah Thomas, Damian Lillard, Draymond Green, Khris Middleton and Devin Booker.

“ET is just a ball of light. His energy, his inspiration, the way he views life and the way he can inspire so many people just by his words is huge.”

Thomas is also using his social media platform to reach people more directly because of the current global state. After he noticed the spread of COVID-19, he posted his cellphone number in his social media bio, encouraging those in need of motivation to reach out. Timberwolves coach Ryan Saunders did so, and the two have since been in touch daily.

The league added Thomas to its lineup of speakers at the mandatory four-day, NBA Rookie Transition Program 2016. For many newcomers to the league, it’s the first time they see him speak in person.

“His speeches are phenomenal,” Williamson said. “The way he breaks down wanting to be great, he breaks it down in such a way that you’ve got to truly look yourself in the mirror and say, ‘Do I want to be great or am I just saying I want to be great?’ He fuels you to go above and beyond.”

SNOW HADN’T YET fallen in Denver, but the days were sometimes gloomy for new Denver Nuggets addition Isaiah Thomas in September 2018.

The two-time All-Star was in an unfamiliar situation, on a one-year deal while rehabbing from hip surgery, when he discovered a new source of inspiration while scrolling through his Instagram feed.

Thomas found one of Eric Thomas’ inspirational posts and sent him a direct message. It got an immediate response. Now the free-agent point guard considers the motivational speaker one of his best friends.

“I wish it was mandatory for every professional team to have to sit down and listen to him talk,” said Isaiah Thomas, who is not related to the speaker. “I know if you heard him talk and the passion that he talks with, it’s going to resonate with all walks of life. It doesn’t matter, and that’s the type of people I want to be around at all times.”

Lately, the two have connected again frequently, with Isaiah Thomas facing the uncertain future of being a recently released free agent in a league currently on hiatus and in a player transaction moratorium. Eric Thomas has also reached out to Allen Crabbe, who was waived by the Timberwolves in late February. Both players assured the motivational speaker that they’re in a strong mental space as they try to make their way back. 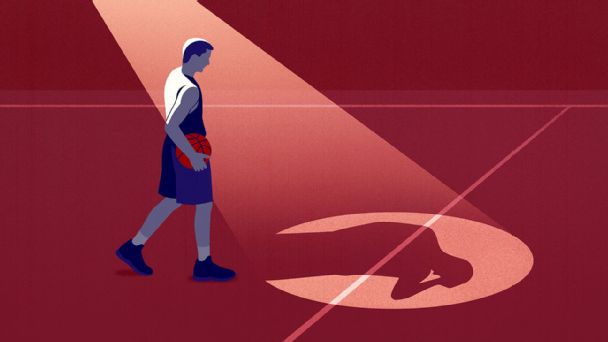 Look back at Jackie MacMullan’s five-part series on mental health issues in the NBA from 2018:

Thomas isn’t the only option for players in similar situations. The NBA requires teams to provide players access to licensed, clinical mental health professionals at all times. Dr. William Parham, the National Basketball Players Association’s director of mental and health wellness, and NBPA player wellness counselor Keyon Dooling have also launched virtual office hours, where players past and present can talk about how best to manage their mental well-being.

“There’s a whole bunch that our guys grapple with, and I’m so thankful that we put this infrastructure in place because a lot of guys haven’t processed their journeys,” said Dooling, who played 13 seasons in the NBA. “They’ve been too busy achieving, and in quiet moments like this, I think it’s a great opportunity.”

A communication from the league office was sent to all teams during the week of the NBA suspension about the impact the COVID-19 pandemic might have on mental and emotional well-being. The memo included customized documents with tips, resources and information from mental health and wellness partners, providers and consultants, to help players, team staff and their families maintain mental wellness.

That’s why the Timberwolves took on the initiative to collaborate with Thomas.

“We pride ourselves in being player-centric, and as we face this incredibly difficult time, we are looking for ways to thoroughly support our players,” Timberwolves president Gersson Rosas told ESPN. “Eric Thomas has a powerful voice with a strong message, and we believe his perspective will encourage our players to stay connected and to motivate them to get through the current challenges we are all facing.”

Having their routines taken from them while the league is on hiatus has presented a new and even more difficult challenge. Social distancing has created an environment where players — used to being surrounded by teammates and fans — no longer have that daily personal contact.

“A lot of people are isolated,” Okogie said. “So definitely, that message pertains in terms of mental health. What can you do to take away from that feeling of being alone?”

One of Thomas’ consistent messages is that even in times of isolation, players never have to feel as if they’re alone.