The U.S.S. Theodore Roosevelt aircraft carrier is pictured off Manila Bay in 2018. The captain, facing a growing outbreak of the coronavirus, asked the Pentagon for permission to move most of his crew to shore. 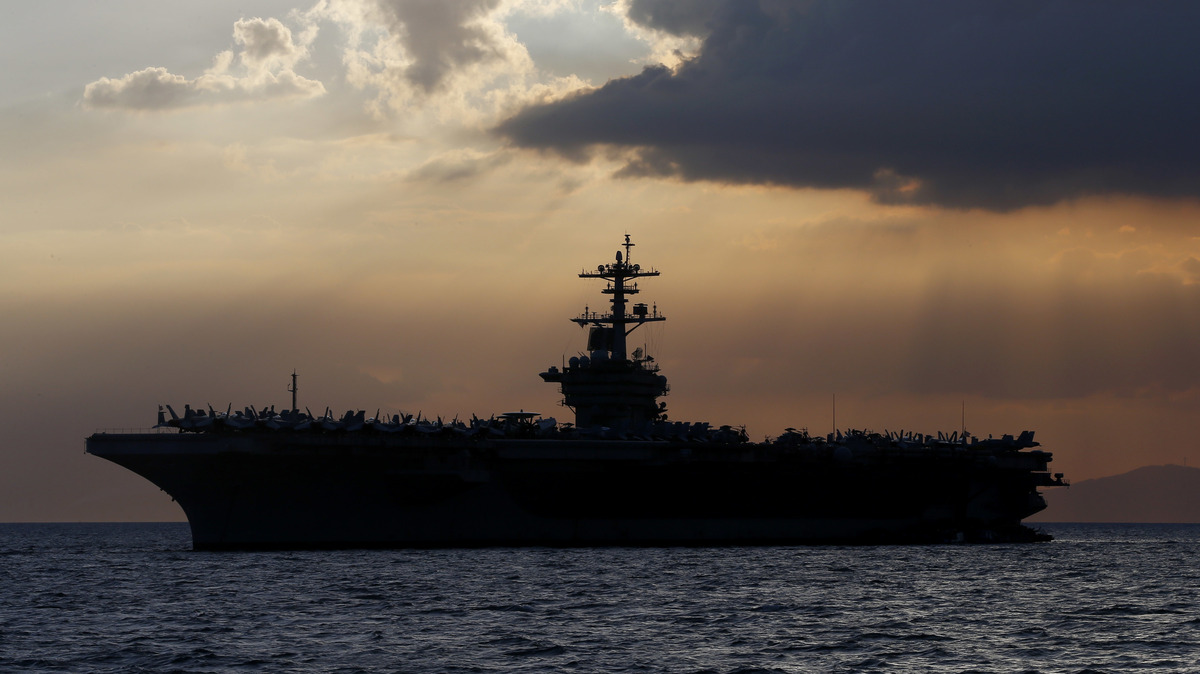 The U.S.S. Theodore Roosevelt aircraft carrier is pictured off Manila Bay in 2018. The captain, facing a growing outbreak of the coronavirus, asked the Pentagon for permission to move most of his crew to shore.

Top U.S. Navy officials on Wednesday defended their response to a coronavirus outbreak aboard the U.S.S. Theodore Roosevelt aircraft carrier, a day after a scathing letter from the warship’s commander that became public, sharply questioned how the health emergency was being handled.

“I recognize that there’ve been a lot of questions about the Teddy Roosevelt, particularly over the last 24 hours,” Acting Secretary of the Navy Thomas Modly said at a Pentagon news conference. “We have accelerated testing and are deep cleaning all the spaces on the ship. We are providing the commanding officer what he has requested and we are doing our best to accelerate the pace wherever we can.”

In his letter, commanding officer Capt. Brett Crozier had asked that all but 10% of his crew of 4,865 sailors be removed from the aircraft carrier to be quarantined in Guam, where the Roosevelt is now at port.

Modly said he did not believe leaving only 10% of the crew aboard could work. “Our plan has always been to remove as much of the crew as we can while maintaining for the ship’s safety,” he said. “This ship has weapons on it, it has munitions on it, it has expensive aircraft, and it has a nuclear power plant. It requires a certain number of people on that ship to maintain the safety and security of the ship.”

The navy secretary added that nearly 1,000 crew members have already disembarked in Guam and said that number will rise to 2,700 by Friday. About half the results from the 1,273 crew members who have been tested are back, he said, and 93 of them are positive — with seven of that group showing no symptoms — while 593 are negative.

“The long pole in the tent, of course, is getting those testing results back as we get those samples to a DOD facility for processing,” the chief of naval operations, Navy Adm. Michael Gilday, told reporters. “We have people ashore that are isolated and have tested positive, we have others [ashore] that are quarantined or isolated, because they’re considered to have been in close contact. And so over that 14-day restricted movement period, as they become clean, they haven’t shown any symptoms, they get tested and then they’re brought back on the ship.”

Gilday said the Navy is working with government officials in Guam to locate additional housing — in particular, hotel rooms — for sailors coming off the aircraft carrier.

Asked whether the letter from the ship’s commander, first reported by The San Francisco Chronicle, had spurred the Navy to take action, Gilday said there had “potentially” been a breakdown in communications with Capt. Crozier.

Crozier charged in his letter that keeping the crew aboard the aircraft carrier was “an unnecessary risk and breaks faith with those Sailors entrusted to our care.”

Asked about whether the Navy was failing to take care of its sailors, Modly rejected the commander’s allegation.

“It’s disappointing to have him say that — however, at the same time, I know that it’s not true. We’ve been working very, very hard with the ship, with the command structure to make sure that’s exactly what we’re doing,” said the Navy’s top civilian. “It’s our priority, we need those sailors to be safe, we need them to be healthy and we need that ship to be operational.”

Modly said of the 94 U.S. Navy ships currently deployed, the Roosevelt is the only one with active cases on board. He added that some Navy ships in port do have coronavirus cases that number in the single digits.

Modly also said Crozier, as the aircraft carrier’s commander, had acted correctly by writing a letter to express his concerns to his chain of command.

“I don’t know who leaked the letter to the media,” he added. “That would be something that would violate the principles of good order and discipline if he were responsible for that, but I don’t know that.”